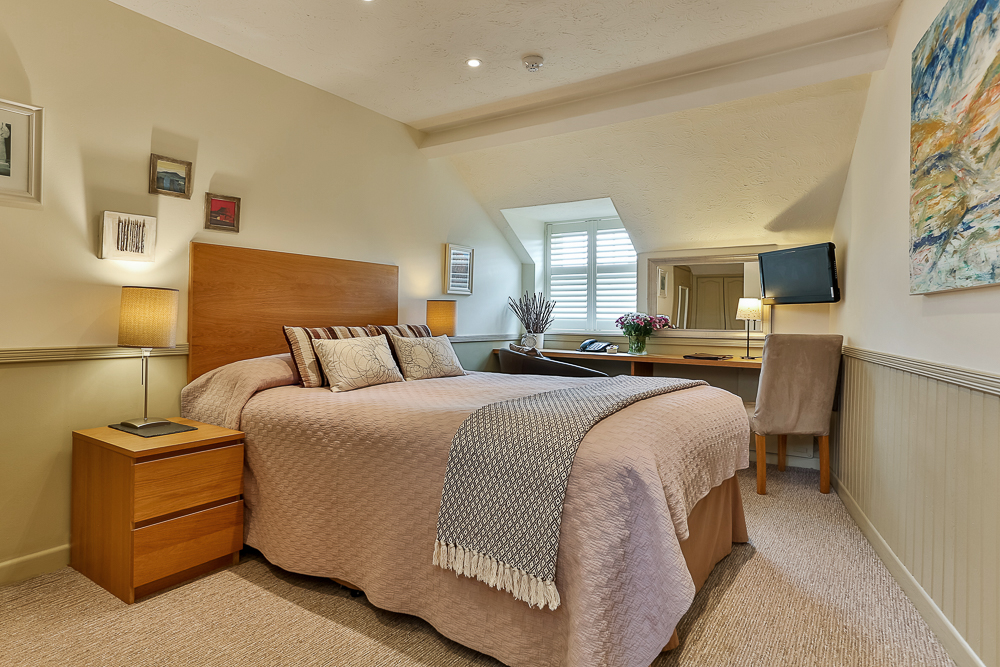 Double bed room with an en-suite with a shower on the top floor.   Lovely room with some original art work that compliment the creams and mute autumn colours that is used in this room on the walls and fabrics. A favourite of many of our guests.
Relax and enjoy. 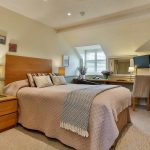 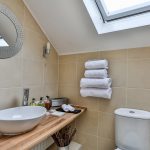 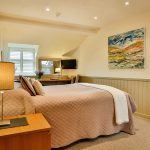 “Our family stayed for three nights at The Coach House, Brecon and found the accommodation, service and menu second to none. We have stayed in many 5* hotels over the years and can honestly state without doubt that this hotel cannot be bettered in terms of its cleanliness, decor and friendly service. The breakfasts are a culinary feast.”

“Our room was on the top floor and was cosy and comfortable. High standard of cleanliness in both the bedroom and bathroom.”

“The room was comfortable and cozy, with a cute bathroom tucked under the eaves.”

“The room itself was clean and the bed very comfortable....the room was an oasis of calm and quiet.”

“This is an excellent B&B with beautifully furnished warm bedrooms and all you could want in a room.”

Taliesin (fl. 6th century) was an early Brythonic poet of Sub-Roman Britain whose work has possibly survived in a Middle Welsh manuscript, the Book of Taliesin. Taliesin was a renowned bard who is believed to have sung at the courts of at least three Brythonic kings. In legend and medieval Welsh poetry, he is often referred to as Taliesin Ben Beirdd ("Taliesin, Chief of Bards" or chief of poets).

According to legend Taliesin was adopted as a child by Elffin, the son of Gwyddno Garanhir, and prophesied the death of Maelgwn Gwynedd from the Yellow Plague. In later stories he became a mythic hero, companion of Bran the Blessed and King Arthur. His legendary biography is found in several late renderings (see below), the earliest surviving narrative being found in a manuscript chronicle of world history written by Elis Gruffydd in the 16th century.

Taliesin was originally known as Gwion Bach ap Gwreang. He was a servent of Cerridwen and was made to stir the Cauldron of Inspiration for one year to allow for Cerridwen to complete her potion of inspiration. Upon completion of this potion, three drops sprang out and landed upon Gwion Bach's thumb. Gwion then placed his thumb in his mouth to soothe his burns resulting in Gwion's enlightenment. Out of fear of what Cerridwen would do to him, Gwion fled and eventually transformed into a piece of grain before being consumed by Cerridwen. Gwion was then reborn and given the name Taliesin. 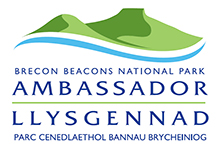 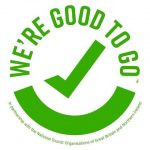 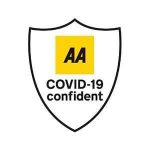